I've made quite a few changes in my portfolio recently so thought I'd better do an update to keep track of my thoughts. Here's my portfolio as it currently stands: 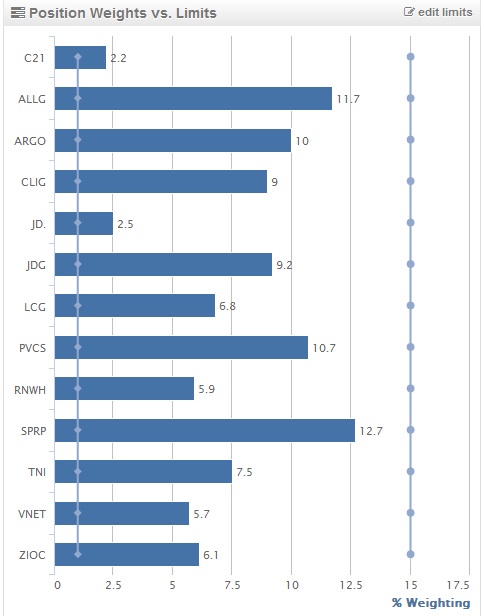 Here's a list of each of portfolio actions since my last update and an explanation:

Sold out of KENZ

I started top slicing KENZ as the price rose for portfolio balancing reasons, with sales at £4.10 and £4.48, but I sold out of my holding at £5.84 entirely after they disclosed that a few bid offers had been turned down. Looking back over my (short) investment history, I realised I'd repeatedly made the wrong decision in potential bid situations (CHG and LCG come to mind). To combat this, I've come up with a new heuristic for dealing with them - I imagine that there's no bid, then take whatever action I would do anyway had the price just risen to that market price regardless. That generally means that at least top slicing is necessary, but in this case I felt that KENZ was close enough to what I'd consider fair value such that I sold out completely to invest elsewhere. Given a ~50% rise from my average cost for KENZ, this investment played out well.

I actually attended an investor presentation by RNWH back in March 2012 and decided against investing in them at 75p. At the time they were lowly rated relative to their profits but I was concerned by the quality of earnings - there was a large exceptional cost in the final results and the cash flow generated was pretty poor relative to profits.

However, I changed my mind and bought in at 115p after taking a second look recently. Their interim results were impressive, with profits continuing to grow, only a small exceptional charge and FCF above reported earnings. Combined with this, the order book was up 19% year on year, continuing the impressive growth management have made in engineering services. The nature of the work they do (essential maintenance & renewal) gives me more confidence that profits will be less cyclical and their margins are high given the sector, confirming higher than normal barriers to entry from other firms bidding for the same business. Despite the price rises recently the business is still on a single digit P/E, which seems harsh given management now have a decent track record of both organic and inorganic growth and the positive outlook for the future.

Since I bought, Renew announced another acquisition at a similarly low multiple which should further boost earnings and supports the thesis that there's plenty of inorganic growth available at an attractive price in their sector. They also announced a number of exceptional items, the net result being an exceptional profit and a large cash injection. I must admit I'd completely missed the extra value from the land they owned so this is a really nice boost and the cash freed up means that they are already 'reloaded' from the latest acquisition and hence can go back on the hunt.

Sometimes in investing it's nice to get a large spot of luck. ZIOC certainly falls in to that category. Despite the large portfolio allocation now of 6.1% I actually only put a few % in originally - my buy price was 11.5p. The share price last closed at 24p. ZIOC is, technically, a miner - an area I profess little expertise in and normally would consider outside my circle of competence however ZIOC is more of a special situation relating to whether or not they can sell their share of the assets they own. There's a really good post and discussion over at the Motley Fool which contains a write up of the situation.

What really attracted me to ZIOC was the asymmetry in the investment. They have a genuinely world class asset supported by work done by Xstrata (now Glencore) and it's right at the bottom of the iron ore cost curve. Whilst the market was panicing over the well publicised collapse of the iron ore market the share price was, indirectly, implying a near zero percent probability for ZIOC being able to derive value from their assets. I felt that ZIOC was a bit of a case of throwing the baby out with the bathwater - most junior miners are (rightly) seen as value destroyers with low quality assets. In the case of ZIOC we have a business that's majority owned by insiders so the incentives for value destruction are low and an asset that could be worth many multiples of (even the current) market price. Due to the low free float, aggressive selling by Blackrock trashed the price and created this interesting investment opportunity. Doing some quick expected value calculations told me that the market was pricing in a tiny probability (a few %) of a sale going through which seems like a mispricing given the obvious quality of the asset they have.

Whilst the price is much less supported by 9p of cash on the balance sheet now than it was at 11p I'm trying to let this position run - I originally priced it as a small % of my portfolio so I could afford to lose it on the basis that I'd let this fairly binary investment play out to conclusion - either they sell the asset and I get a huge multi-bagger or they can't and I make a small loss (supported by the cash position). That being said, as the price rises it does get tempting to take profits...

With ARGO still trading at an attractive valuation I topped up my holding with the capital I'd gotten from selling out of KENZ. Wexboy has just given his assessment of the value here and I'm a fan of discount-to-asset plays, especially given the business still is throwing off a large dividend and is profitable.

Sold out of TRCS

This was a tough one for me and required a lot of thought - I first wrote about Tracsis here where I reasoned that they were a good long term bet. I'm still convinced of this, although now I have more valuation concerns. I was expecting significant profit growth this year, especially given the boost to earnings from Sky High, but it appears that EPS should only grow slightly. This is all down to how much profits are dependent on the MPEC division now, where revenues are dependent on winning contracts. As I've seen with my C21 experience, markets don't tend to look too favourably on short term disappointment. Given what I thought was disappointing growth in earnings combined with a ~10% share price appreciation since my original purchase made me re-assess how much margin of safety I had.

I still really rate the management of Tracsis and I think the business will be worth considerably more 5+ years down the line but I'm more concerned about the near term future. Arguably this is a mistake and a longer term horizon would prove more rewarding but when I start having doubts about an investment decision I tend to err on the side of caution and sell - I really want the valuation discrepancy to be shockingly large and not a close cut thing. I'll keep an eye on TRCS though and would love to buy back in at a lower valuation.

Bought in to VNET

This was another tough one, as there's a multitude of things I dislike about Vianet, but in the end the price has proved too tempting. VNET has fallen from ~120p earlier in the year to around 68p now on the back of disappointing results and the news that there's a consultation in to regulation regarding pub ties which could impact them negatively. Other negatives are a seemingly endless decline in revenues and profits and a number of divisions which seem to repeatedly lose money. Quality of earnings is also a concern of mine, as they do capitalise a lot of costs and repeatedly have exceptional costs (they aren't exceptional if they happen every year!).

That being said, there are a few positives amongst the doom and gloom. The CEO owns 15% of the business and was buying shares in significant volume fairly recently at much higher prices (~100p) than today - he clearly believes in his business and thinks there's value here unappreciated by the market (and I'm a big fan of owner-operators - never forget the power of incentives!). The current price offers an 8.7% dividend and a historic P/E of sub-10. It's worth noting that there are a number of loss making divisions which obscure the true earnings power of their core Brulines business, which earns big healthy margins (although sadly in a declining industry - pubs have been net closing in the UK for decades). The current forecast, however, is for a large improvement in profits to 14p a share, probably largely from management expectations that the loss-making divisions will move in to profit. Whilst a doubling of profits seems unlikely to me, even a large miss to say 10p would put the shares on a P/E of under 7. Also, I consider the proposed regulatory changes very unlikely to happen - the Vianet response document is very interesting. Some of the 'arguments' against flow monitoring equipment like Vianets are just plain ridiculous. Consider this one:

5.2 Clearly, it is entirely legitimate for one party to a contract to seek to ensure that the other party complies with the terms of that contract. However, the model of the tied public house has been part of the British pub industry since at least the 18th century and for the majority of that time modern flow monitoring equipment has not been available. It is therefore clearly possible to operate a tied estate and to enforce the tie without the use of flow monitoring equipment.

Vianet's response pretty much sums up the rational response to such a statement:

Whilst pubs may have operated successfully before the advent of beer line cooling, electronic point of sale and electric lights were invented, nobody is suggesting they should go back to warm beer, paper book-keeping and the use of gas lanterns and candles.

I think the market is over-pricing in the risk that this proposal could ever become law and is capitalising the losses from the loss making divisions (which really should be seen more like startups in their own right) creating this attractive entry price.
Posted by Unknown at 12:19