As it's now (a bit over, I'm slightly late!) 6 months into the year it's time for a portfolio update. Whilst I think 6 months is an insanely short period to measure portfolio performance it's at least interesting to reflect on decisions made in the time period and try and look for areas of improvement.

For reference, here's what my portfolio looked like going in to 2012: 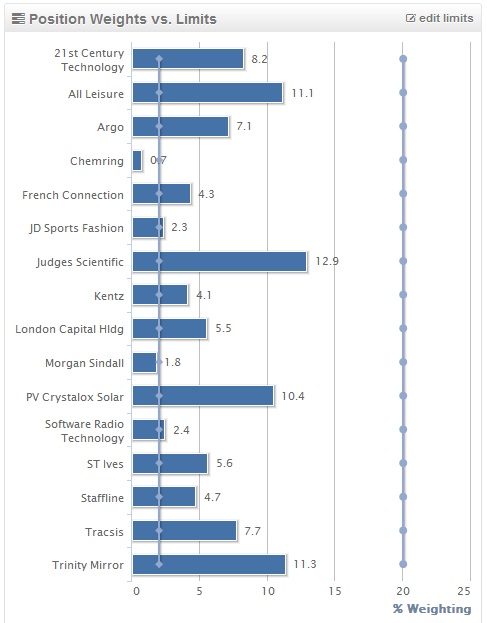 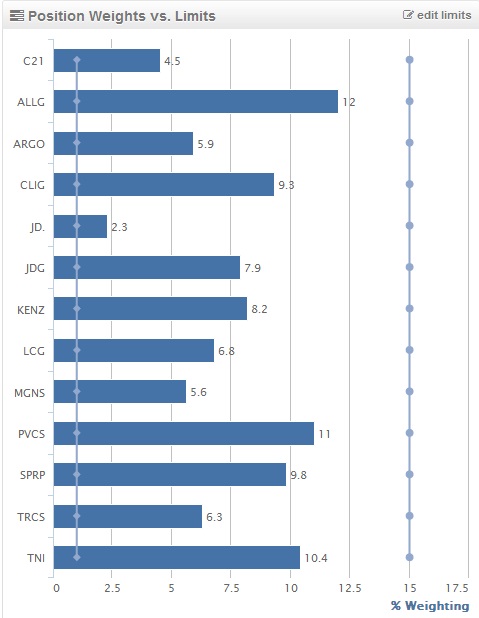 As of this weekend, this corresponded to a total return of 20.4% after costs (An IRR of 44.1%). Whilst good, this is only marginally ahead of the returns I'd have made in the main benchmark, the FTSE Small-Cap Index (ex-investment trusts) of 18.4% although decently ahead of the FTSE All share, which would have grown my capital 12.2%.

I've gone from a total of 16 investments down to 13, so I've gone more concentrated overall. Partly this is down to a conscious choice to limit the number of holes on my investment 'punch card' in order to force me to really think about my investments although I'd quite like to go back up to around ~15 investments as this feels like a good balance between concentration and diversification.

The big positive drivers of my overall return have been from ALLG, JDG and SPRP. ALLG & JDG I felt were my best ideas and hence had big allocations going in to 2012. Both performed well, with JDG reaching new highs recently although ALLG has given a lot of performance back since peaking at over 50p in April. SPRP is a more recent addition I made with the proceeds from halving my stake in JDG (made because it was making up an uncomfortably high % of my portfolio)

The biggest detractors of my performance have been from CLIG and C21. I continue to hold both, and have added more to CLIG recently as the price has fallen.

Closed out around 26.5p. To quote a previous post:


As for the rest of my portfolio, since my last post I've sold out completely of FCCN and redirected the proceeds in to KENZ and MGNS (which have both gone up since, nice to have a bit of good luck!). The losses at FCCN were worse than expected and due to the high operational gearing of the company the risk here is too high for me. Against weak comparables from last year the company still reported a revenue fall. The company has net cash of ~£25m, granted, but they burned £10m of cash last year. Even if things don't get worse, which there's no reason why they couldn't, they'd burn through that pile pretty quickly. Operational gearing could make the situation either very, very good or very, very bad here - it's kind of an all or nothing punt. Since I'm an investor who likes to be fairly concentrated and I can't protect the downside here it's one I'm going to pass on.

Sold out at 273.3p. It was a small position for me (I covered CHG in my 'Investment Mistakes' post - it didn't go very well!). A combination of feeling that I couldn't determine intrinsic value anymore due to the rapid earnings collapse as well as a desire to focus on high conviction positions led me to sell out.

Sold out at 339p. I still really like the company and sold far too early (the shares are now 440p) but at a P/E of 12 (when I sold) I felt I had cheaper ideas to invest in to. Also, I was concerned about the need to build up working capital from the Welfare to Work scheme and I disliked the fact it that part of the business relies on government spending for a policy-du-jour. That being said the company has a great long term track record and management have been executing well, so I can understand further price rises.

Sold at 132p. Again, too early, the value investor's curse. Here quality of earnings concerned me, as investors seemed happy to focus on adjusted earnings and dividend yield ahead of true cash flow generation. When I met with management I was told that the restructuring was over and to expect no more exceptional charges - but now the exceptionals no longer live up to their name. I was also a bit weary of the prices being paid for some acquisitions, which are the main source of cash-flow reinvestment. On balance, despite seeming cheapish, I felt that after the price appreciation and my revised expectations for 'real' earnings I had better ideas elsewhere.

Sold at 23p (D'oh!) as part of a deliberate focus of strategy to move away from hot growth stocks with no cash flow (regardless of the convincing nature of the story!). I felt the growth in sales being made over the last 2 years didn't justify the valuation and given the mandated nature of the sales I felt the story was undermined somewhat. The shares are now 34p, so I'm living up to my own incredibly low expectations of myself when it comes to market timing!

A wind up play I exited after participating in a tender offer at NAV. Overall I made a small ~5% return here, so not bad although I exited early after I changed my mind on the investment due to recent events. First, the new managers published a more detailed look at the assets of the portfolio which were worse than I was expecting. Second, the activist investor on the board resigned and has begun selling down their position. Third, after the tender the share price dropped much less than I expected it should have done given a constant discount to the non-cash assets. The combination of these three lead me to consider ideas elsewhere.

My largest faller in my investment list, down 30% since the start of January (excluding dividends). Sadly this is a case of a GARP share losing the G part. EPS was forecast to grow to 2p (which also seemed reasonable to me given the recent success in winning contracts) but instead is now forecast to come in around 1p instead, quite a difference! The company put this down to delays in receiving orders, teasingly hinting that this is because the 'large value' of the contracts means they have to go out to tender first:


For the five months to 27 May 2013, our trading results are ahead of the Board's expectations but, as in prior years, the Group's sales targets are weighted toward the second half of the year. Generally the market does remain subdued and consequently we are encountering delays in progressing a number of potential sales. Given the value of these, the Board currently expects revenues for the full year to be similar to those achieved in the year to 31 December 2012 at around £14m.

These previously anticipated new sales have been impacted by a number of significant overseas customers needing to obtain funding from local transport authorities before committing to new projects whilst others, who are trialling EcoManager, potentially now being obligated to go through tender processes because of the large value of these contracts.


They also claim additional investment in marketing and sales is hurting short term profits for long-term benefit. If true, this is the kind of long-term thinking I applaud from public companies so I'm willing to give the management the benefit of the doubt here.

Thankfully because I was able to buy C21 with a large margin of safety in the first place even a drastic cut in expected profit doesn't make the shares seem overpriced (and the 30% decline has helped too!) - in fact they seem very cheap even under fairly pessimistic scenarios of growth. They have around £2m of net cash on the balance sheet (against a market cap of ~£10m) and are on a P/E of 10.5, 8.4 ex-cash and yield 6.67%. Should any of these large contracts ever actually appear then the company is insanely cheap although even under a no-growth scenario on sub-peak profits the investment is hardly expensive. I continue to hold.

Currently down 16% on the year and over 20% from my initial purchases. However in this case I've decided to add more and build my position. Why? The shares have been under pressure from two sources. First, they are an emerging markets asset manager and EM indexes have been performing badly. I believe this to be a good buying opportunity rather than any long term problem with EMs and investors are overly focusing on the negatives when there's so many positives - see Wexboy's detailed thesis here - and EMs have historically performed well at similar valuations to today.

The much more worrying second reason is the recent board room shakeup. The founder, Barry Olliff, had to come back to lead the firm once more after the CEO and Finance director both resigned. Both these two were long-timers at the firm which makes this increasingly concerning, although the counter to this is that Barry and other insiders still own large amounts of the company and so still have their incentives well aligned with shareholders. As asset managers are largely 'people' businesses it's ultra-important to have the incentives between staff and shareholders aligned compared to other businesses.

On balance, the cheapness and quality of the business still attract me here. At the current prices investors are getting a >10% yield (which management confirm they will pay, despite low cover) and a low P/E on what I believe are cyclically depressed earnings. I don't know when EMs will come back in to favour but I think that they will eventually, helping CLIG to grow AUM again. CLIG's long-term investment results and refreshing approach to asset management also resonate with me, as I identified in a previous post.


That's all of my closed positions and significant performance detractors covered - I'll save the rest for a future post.
Posted by Unknown at 15:27