2012 results and my current portfolio

To conclude my mini-series reviewing my investing winners & losers here's a final tally of my results for 2012 and then lifetime (to include the disastrous half of 2011 I began investing in). Current positions are valued to bid prices and none of this includes taxes although all stamp duty, dealing costs, spread costs etc are included:

It's worth clarifying these numbers quite a lot. I added a lot to my portfolio throughout 2012 as cash became available so this skews the IRR a lot - most of my out-performance came at the latter half of 2012, just after I'd added a lot of extra cash to my portfolio. This both flatters the IRR and makes the damage I did in 2011 look less significant (I ended 2011 26.66% down, with a negative IRR of -43.47%! This is significantly under performing both the FTSE All share & Small cap indices IRR of -8.44% and -24.95% respectively).

Two other significant factors also make this data next to useless for judging my investment ability. First, a year and a half is far too short a time period to judge investment results (especially when so heavily skewed by the timing of my cash allocation). I'm personally looking to judge myself over 5 year rolling periods, if I can't beat the market over that time period I'm probably not good enough and should just stick to index trackers (even if it is really fun trying all the same!). Secondly, I'm fairly concentrated, and for a large part of this year I had up to 20% of my total portfolio in a single stock (Judges Scientific) and currently have a bit over 50% of my portfolio in my top four positions. This style will naturally bring an extra degree of price volatility, although I disagree with the notion that this necessarily equates to increased risk.

Having said all that though, I'm obviously happy to be ahead of my target indices! I track the IRR of the FTSE Small Cap & All Share indices based on when I added cash in to the market and they have returned 8.54% and 1.00% since I began investing so I'm glad to be ahead (Also, do any readers know if these two indices, ASX and SMXX, are inclusive of dividends? I don't think they are and worry it's not a fair comparison). Anyway, it'd be a shame to ruin the party by going on and on about statistical significance wouldn't it? :)

Thanks to the wonders of Stockopedia's awesome portfolio allocation breakdown, I can give a peak in to what's in my current portfolio: 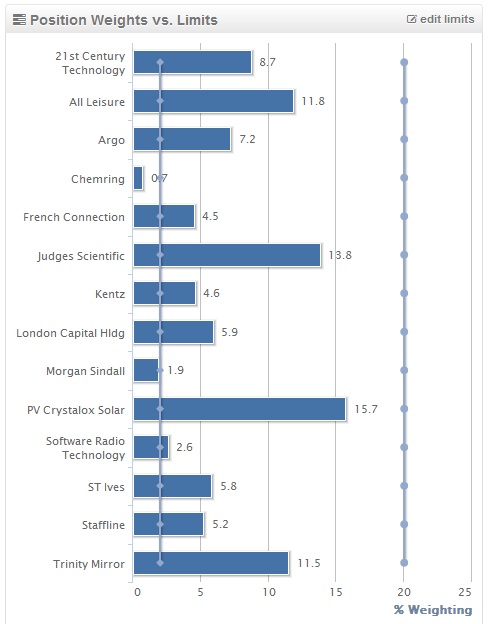 Now I probably need to do some tweaking here soon - PVCS has shot up to a larger position than I'm probably comfortable with (and the rise has reduced the margin of safety to my valuation, so I should be looking to make it a smaller allocation anyway) and I want to add more to MGNS so I'll probably make that change soon.

There's a number of shares on that list I haven't discussed at all in my 2012 review, largely because they haven't moved much in price to be counted as either a "winner" or a "loser" (ALLG, ARGO, KENTZ, LCG, MGNS, SIV). I'll get round to doing write ups on these shares in good time too, although you can read pretty much everything I think about ALLG in this thread on the TMF and I really have very little to add to Wexboy's ARGO series.

Happy new year everyone, hope it's a good one for investors!


Disclosure: I hold all the shares shown in my portfolio above... obviously.